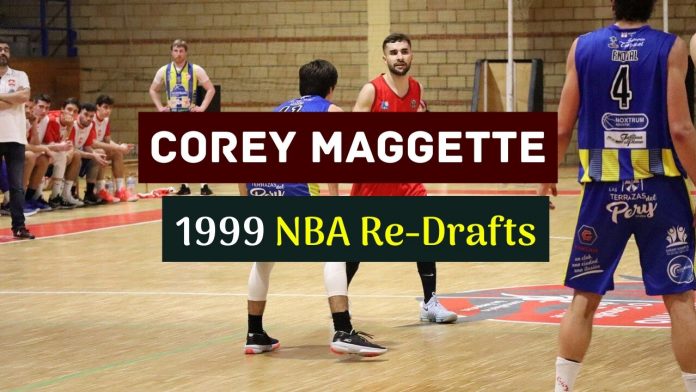 Due to the pandemic, a lot of sports and media outlets have been doing re-drafts to fill the time. NBA experts are taking a look at drafts from the last 30 years or so, and doing a re-draft based on how careers played out.

The 1999 NBA Draft was pretty intriguing, as several all-stars emerged over time. Although Maggette did not make an All-Star team, he is one of the best never to receive that honor. That is why he is consistently drafted ahead of his actual draft pick of 13. Just how good was he compared to his class?

Players clearly ahead of Maggette

From this draft class, there are a total of five players that made at least one All-Star team, and one All-NBA team in their career. Elton Brand, Baron Davis, Shawn Marion, Ron Artest, and Manu Ginóbili are all pretty clearly ahead of Corey Maggette based on credentials. Even though Maggette was a better player at certain times in his career than some of those players, it would be hard to justify putting him above them.

The number one picked player in most re-drafts tends to be either Manu Ginóbili or Elton Brand. Neither player was a true superstar for an extended period, but they are both Hall of Fame-caliber players that had sustained success.

After those five players, Corey Maggette is firmly in the second tier of talented players from the draft class. Other players include Richard Hamilton, Lamar Odom, Jason Terry, Andre Miller, and Steve Francis. All players in this group have some flaws, but people seem to be pretty high on what Maggette brought to the table.

The biggest knock on Maggette during these re-draft pieces is the fact that he lacks any true team success. While some people might put that partly on him, it also comes down to some bad luck playing on rebuilding teams. He averaged over 16 points and five rebounds for his career, and maybe those numbers would be slightly down if he was on better teams. However, he was a key part of the Los Angeles Clippers finally making it back to the playoffs in 2006, and he played his role to the best of his ability.

Most people are putting Richard Hamilton and Lamar Odom ahead of Maggette, and that mostly has to do with team success. Both of these players one NBA championships during the career, and Terry found a way to win.

Bill Simmons from The Ringer said during his re-draft podcast that he wished Maggette had a chance to play on one title contender at some point in his career. He was impressed with his ability to get to the line and knock down shots as a bruising wing. Simmons, along with his podcast guests Chris Ryan and Joe House, all agreed he had the makings of a reliable 3rd option on a playoff team, or a leader on the second unit.

Was Corey Maggette undervalued coming out of college?

Knowing what we know now about Maggette’s career, there is no doubt that he was undervalue coming out of college. It’s hard to imagine that was the case since he played for a very good Duke team, but he was still viewed as very young and raw. In 1999, players that young usually didn’t go particularly high in the draft, as teams focused more on established talent.

Even the re-draft pieces that don’t favor Maggette as much as others put him at, or slightly above, his actual draft position. The truth of the matter is, it’s hard to find ten players who were clearly better than him in the draft class. All in all, he was a solid value pick late in the lottery in 1999.

Today Maggette lives in Orange County, California and is involved in the BIG3, Youth Basketball, and even had an Opal NBA 2k card released recently as he’s still one of the most relevant basketball players who was drafted in the 90’s.