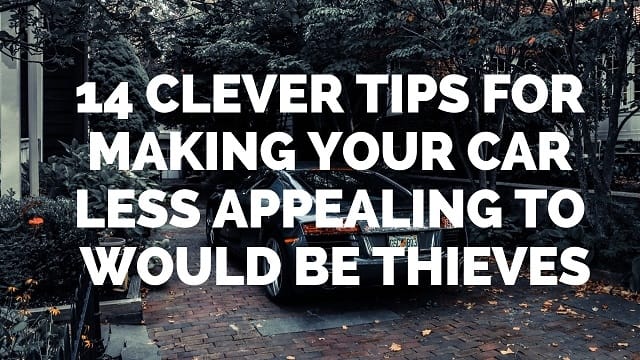 Your Car is probably the next best investment after property, and it makes sense giving it the best care. This includes protecting it from thieves that are always on the lookout for careless car owners. Estimates from FBI’s Uniform Crime Reporting Program show thousands of vehicle theft in the US each year. Billions of dollars are lost every year due to vehicle theft with car owners with new models made in 2000 or earlier the most vulnerable.

Are you looking to make your car less attractive to thieves? The ease at which a thief can steal your car, the more likely they are going to be attracted to it. Some of the simple mistakes we make are what attracts thieves to our cars. It is tempting to leave your cars window slightly open in the soaring summer temperatures. However, that is simply inviting a thief to come to steal your car.

There is a big misconception that the largest number of stolen cars are the expensive models. Thieves only go after easy targets. Manufacturing electric cars have been on the rise with only a single Tesla stolen four years after the first model was produced. In fact, the recovery of Tesla stolen cars is almost 100 percent compared to other vehicles.

So, what clever tips can one use to ensure their cars are less likely to be targeted by thieves? Here are some important safety tips to make your vehicle less appealing to thieves. Remember nothing should be left to chance. Anything that can slow down a thief from targeting your car should be tried.

This might seem obvious, but you will be surprised at the number of people that forget to lock their cars. Sometimes it appears unnecessary to lock your car when just stopping to grab something for a minute. However, this is a great opportunity you’re giving to a thief who’s close by.

The one second you take to lock your car can save you the trauma of losing your car. Most professional thieves just need to gain access to your car to get it started. Locking your car may look obvious, but it is always a necessity. Your vehicle should be kept locked at all times even when driving.

One of the biggest mistakes you can make is forgetting to lock your car, and still leave the key in the ignition. This is like calling out for a thief and asking them to steal your car. Even criminals that had no intention of stealing your car will simply be attracted.

Keep Valuables out of Sight

Majority of car thieves will be attracted to your car simply because they saw some valuable items inside. Do you often leave your Smartphone or MP3 Player in the car? This is likely going to attract people to break into your car. While your car might not be stolen, nobody wants to see their car broken into just because they were careless.

If you don’t have to leave with your valuables, then make sure they are well-hidden. Out of sight out of mind.

Add an Extra Layer of Security to your Car

While a majority of vehicles come with comprehensive alarms, you can always add an aftermarket alarm. Fitting aftermarket security devices can deter thieves. There are advanced alarms on the market with features that allow for remote control from an app in your Smartphone.

The problem with original car alarms is that thieves understand about them. If they target your car, they probably understand the manufacturer’s alarm and how to turn it off without being noticed easily. This is why adding an aftermarket alarm is highly recommended.

Apart from car alarms, you can always add an anti-theft device to deter thieves even further. Anti-theft car devices include things like a steering wheel lock and car-disabling locks. These extra features make it difficult to steal your car. Even with access to your car, it will still be difficult for thieves to drive away with your car.

You can also install a tracking system which can help police locate your car fast in case it’s stolen. This greatly improves your chances of recovery. An anti-theft device also gives your car a nice score when taking car insurance. This means you will enjoy lower premiums than most other people.

Most thieves that are pulled over by the police usually get away because they can produce the vehicle title. It is recommended you hide the title at some secret place within the car especially if it is used by multiple drivers. This greatly increases your chance of getting the car when stolen. The numerous police checks when a vehicle is stolen will not bear any fruits if the thief can produce all the necessary car documents.

Park in a Well lit Area During the Dark

Well-lit areas are quite safe for your car and deter thieves who fear they will be seen breaking into your car. Thieves are always on the lookout for careless drivers that leave their cars at dark places. The cover of the night gives them confidence as they know they will not be seen. It is unlikely that a thief will break into your car when it’s parked in a well-lit place.

Have the Car’s Registration Number Etched on the Windows

You’ve probably seen car identification numbers etched on the windows. Well, this is an added security feature that will deter thieves. Most thieves want to steal your car and dispose of it with ease without incurring extra expenses. They will usually take off your number plate and replace it with a different one before disposing of the vehicle. However, the extra expense of replacing window glasses is something they would want to avoid.

Use a Smart Key

When shopping for a new car, make sure you consider those with smart keys. These are likely new modern cars on the market. The smart keys feature a computer chip that cannot be duplicated or altered with ease.

A driver must have this key for the vehicle to start. This means thieves will not be able to drive your car even after gaining entry.

There are cases where thieves just tow your car away. However, leaving the car wheels facing an obstacle makes it difficult to move the car.

Switch off the Engine at all Times

There are instances where it is convenient to leave your car engine on. This is the case when getting something that will take you a few seconds or a minute. It can be getting to the ATM or buying a snack. Leaving your car unattended even for such a short time with the engine running can cause a problem. It only takes seconds for a thief to get away with your car.

It is recommended that you remember registration plates as thieves can sell a different vehicle in your name. This is what we call cloning where thieves steal a similar vehicle like yours and re-sell it off as yours.

In case you have your registration plates stolen, don’t ignore it. Make sure you report immediately as the replica vehicle can be used to commit crimes. You don’t want to be on the wrong side of the law as police will definitely question you.

Beware of your Surroundings

Nowadays, everyone people are so busy on their smartphones that they do not even take time to familiarize themselves with their surroundings.

Your car is likely to be stolen if you’re not aware of the surroundings. Look around before parking your car and ensure the place looks safe. Even in gas stations, always look around and park your car at the safest place possible.

There are areas that have high crime rates where your car is likely to be stolen if left unattended for long. Always know where you’re going to avoid such cases. If it means taking a longer route to get to your destination, then do it.

Look Out for Distraction Signs

Sometimes thieves simply want to steal a specific car and will look for ways to get inside. They can easily distract you by placing a piece of paper on the rearview window or have a plastic bottle over the wheel. These are all tricks to get you outside the car and chances are the car engine will be running.

In some instances, a thief might stop you to show you something under your car. Once you get out, they will jump inside and drive off. Always make sure you drive to a safe place before checking anything out and lock your car.

Taking care of your car is important as a car is a major investment. Make sure you implement these tips to keep thieves away.