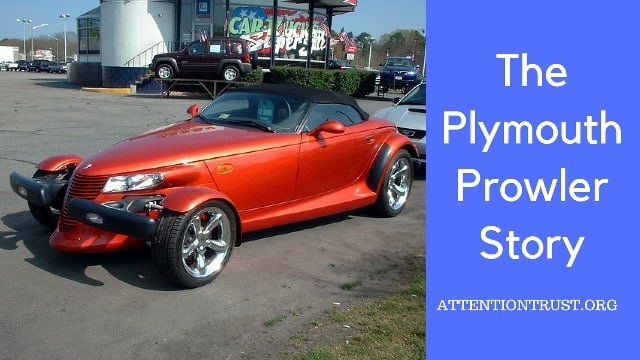 In case you haven’t seen a Plymouth Prowler, either in a photo or in person, you know there’s a story behind it. Automobile companies don’t make cars like this without a reason. But what is the Plymouth Prowler story? We wanted to know, so our investigative team (OK, that’s just me) looked into it and here’s what we found.

About to be Extinct

Let’s start with the state of Chrysler in the late 1990s. In a nutshell, Chrysler was in peril and was looking at killing off brands that weren’t earning their keep; Plymouth was one of them. The brand didn’t have the distinctive niche market that it once had and it was being judged as “redundant” by some at Chrysler. According to our Plymouth experts at NorthWest Chrysler, Dodge, Jeep, Ram of Houston, TX, as a last-ditch attempt to inject a little life back into the brand, the Plymouth Prowler project was developed. In a way, this is something akin to the Dodge Viper story. The Viper was also a limited-use car that was considered a platform to try out some new manufacturing techniques and materials on. Funny thing is, neither the Prowler nor the Viper were supposed to make much money for Chrysler. The anticipated sales numbers were too low. They were really just garner some attention for their brands.

In the early 1990s, at Chrysler’s Pacifica Design Center, the concept of a retro-looking roadster was suggested by Automobile Designer Tom Tremont. Still just in the sketch stage, the idea was presented to Tom Gale who personally owned a ’33 highboy hot rod. Gale loved the concept and soon it was an official Chrysler project.

Shown at the 1993 Detroit North American International Auto Show, the Prowler stunned the audience. This was the first modern hot rod styled with traditional details. Take the interior, for example: the seats were aluminum-framed and the dash layout put a single gauge in front of the driver. The tachometer stuck up from the steering column giving it that 1940s hot rod add-on look.

A Liabilities Present Themselves

When it finally went into production in 1997, however, a compromise that the design team made, ended up being a liability. The Prowler used the same basic drive train components that the Concorde did, a tame V6. Problem was most customers wanted a powerful V8.

Secondly, the prowler wasn’t particularly practical for everyday use. It had an open top, two seats, and very little trunk space (although Chrysler did make a cute little trailer specifically designed for the Prowler).

Chrysler had expected to sell 3,000 in its first year (1997), but only 457 moved off dealer showroom floors. The remaining years weren’t too bad, averaging a tad above 3,000 per year until 2002 when Plymouth pulled the plug. Today, it appears that the poor Prowler has gotten a bad rap largely because the sales weren’t exactly stellar, but Chrysler did accomplish what it set out to establish: the Plymouth brand could still do some cool things.